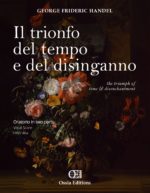 Backround: Handel’s Il trionfo del tempo e del disinganno (The Triumph of Time and Disenchantment) had its premiere performance in Rome in the first few months of 1707 at one of the residences of the librettist of the work, Cardinal Benedetto Pamphili. Pamphili was one of Handel’s first patrons when he arrived in Italy, and additionally provided text for several of Handel’s Italian cantatas. Handel was only 22 years old when he wrote Trionfo, and only having been in Italy for a brief time, one can hear already the great influence of Roman music on his compositional style. The score featured the extreme virtuosic ability and superb gracefulness of Arcangelo Corelli, the leading violinist of the Ottoboni orchestra for which Handel was writing. While the work is known as an oratorio, the story is not directly religious in subject; a more accurate label would be “moral cantata,” as the plot deals with the conflict between earthly pleasures and divinity. The work was revised twice in the composers lifetime, in 1737 and 1757, but this original version remains the most spectacular.

Synopsis: Bellezza (Beauty) knows that one day her beauty will fade, but Piacere (Pleasure) tries to convince her otherwise, promising her eternal beauty. Tempo (Time) and Disinganno (Disenchantment) together insist that, like a flower, beauty and the charms of youth do not last. Bellezza continues to wrestle with her conscience, being pulled in opposite directions by Piacere, Tempo, and Disinganno. Ultimately she sees the truth, and frees herself from vain pleasures, turning her heart to God.