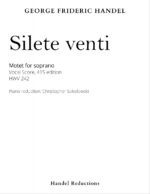 “Many performers and audience members alike believe that—in his operas, cantatas, and motets—Handel composed some of the most beautiful, supple, and intrinsically “vocal” music ever written. Countless examples can be found, and one of the best is his Latin motet Silete venti, composed in London sometime between 1724 and 1730. The date is uncertain, and theories propose that he composed the work for one of his London opera singers, or even perhaps for a Roman patron or cardinal during Handel’s return visit to Italy in 1729. Much of the motet’s music is borrowed from earlier works, but the result is no less splendid due to the recycling; in fact, Silete venti is one of Handel’s most lavish motets. As each movement unfolds, we hear some of his most skillful text-setting, combined with rich orchestral timbres all derived from a relatively economical ensemble of oboes, bassoon, strings, and continuo. And although the length of the work is less than thirty minutes, its framework is rather grand, beginning with an impressive overture, followed by pairs of accompanied recitatives and arias—all deeply expressive and operatic in scale—and culminating in a florid and technically demanding “Alleluia” that makes clear Handel’s intention that this superb and demanding music would be sung by a professional and virtuoso singer.”