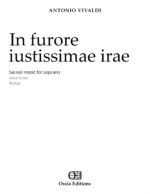 “In furore iustissimae irae, RV626, belongs to a group of three surviving solo motets for soprano that Vivaldi composed in Rome on one of his visits to that city in the 1720s. Two sojourns in Rome, one in the carnival season of 1722/3 and the other in the season following, are documented for him, and he is believed to have spent one further, as yet unidentified, carnival season there. Many solo motets of Vivaldi’s time were ‘per ogni tempo’—for all seasons. The advantage of setting a poetic text so general in nature that it fitted the majority of feasts was that it enabled the resulting motet to become a repertory work capable of frequent repetition, thus more rewarding to composer and singer alike. Since its text is addressed directly to God and to Jesus, this work belongs to this type. The opening aria depicts, with its stormy unisons and powerful chromatic descents, divine wrath at human misdeeds. The exceptionally brief recitative is a plea for mercy, and in the second aria, which in typical fashion is slower and more lyrical in character than the first, the singer begs the Saviour to make him (or her) contrite. The ‘Alleluia’ returns to the opening mood in order to produce a well-rounded effect.”

Report an abuse for product In furore iustissimae irae, RV 626