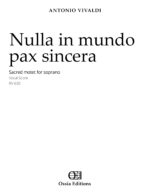 Nulla in mundo pax sincera, RV 630, is a sacred motet composed by Antonio Vivaldi in 1735 to an anonymous Latin text, the title of which may be translated as “In this world there is no honest peace” or “There is no true peace in this world without bitterness”. Written in the key of E major and in the typical lyrical Italian Baroque style, it is scored for solo soprano, two violins, viola and basso continuo, this would normally be a cello and keyboard instrument, in Vivaldi’s case often the organ. The text dwells on the imperfections of a world full of evil and sin, and praises Jesus for the salvation he offers from it. It is considered to be one of Vivaldi’s most beautiful solo motets.

1. Aria
There is no sincere peace in the world
without bitterness; purity and truth,
sweet Jesus, lie in you.
Amidst punishments and torments
the soul lives contented
with chaste love its only hope.

Recitativo
The world deceives the eye with charming beauty
but consumes the heart with a hidden blow
let us flee he who ridicules, shun he who follows,
for by displaying pleasures carelessly
he wishes to conquer.

2. Aria
The snake hisses
among the flowers and beauty
uncoiling its hidden poison.
But these concealed, contaminated lips
a man wild in love
often licks as if it were honey.

© 2022 Ossia Editions. Please contact us for permission to use.